1- Graphic Design Is the Process of Creating Visual Content to Communicate Messages.

Graphic design is the process of creating visual content to communicate messages. This can be done through various mediums, including print, digital, and web. A graphic designer is responsible for developing the concept, idea, or message and creating a visual representation. The goal is to create a compelling and visually appealing piece.

2- Graphic Design and Animation Are Often Used Together to Create Compelling Visuals.

Graphic design and animation are often used together to create compelling visuals. While they may seem similar, the two disciplines have some critical differences.

Graphic designers use typography, images, and layout to create static designs, such as posters, logos, and web pages. Animation, on the other hand, brings these designs to life by adding movement. This can be done through various techniques, such as drawing each frame by hand or using software to create the movement digitally.

Interestingly, the two disciplines often work together to create more effective visuals. Graphic designers may create the initial design and then hand it off to animators who will add the movement. This gives videos and other multimedia a more professional look and feel.

3- Graphic Design Is Typically Used for Static Visuals, While Animation Is Used for Motion Graphics.

Graphic design is the process of visual communication and problem-solving through typography, photography, and illustration. It is often used to create static visuals, such as logos, posters, and website designs.

On the other hand, the animation is the process of creating motion graphics. This involves the use of animation software to create moving images and videos. This can be used for various purposes, such as advertising, storytelling, or training videos.

4- Graphic Design and Animation Are Two Different Fields That Often Work Together to Create Amazing Visuals.

Graphic design and animation are different fields, but they often work together to create amazing visuals. Graphic designers use typography, layout, and illustration to create images that communicate a message, while animators use movement and timing to create a sense of motion.

Although the two fields are different, they often work together to create stunning visuals. Graphic designers often create the initial design or concept for animation, and animators bring these designs to life. This collaboration could result in some truly incredible visuals that wouldn’t be possible if the two fields worked separately.

Generally, graphic design is more static, while the animation is more fluid. Graphic designers often work with text and images, arranging and rearranging them to create a specific effect, while animators create characters and worlds that come to life.

Graphic design concentrates on creating visuals for documents, including letters, brochures, flyers, business cards, and website designs. Animation deals with making moving images that communicate a story or idea. Graphic designers may specialize in one type of animation more than another.

Content writing or web designing? Which should come first 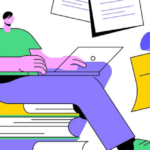