Software development refers to a set of computer science programs that are dedicated to the function of building, designing, and supporting the software. The software itself can be stated as a set of instructions that inform a computer what has to be done. Based on its different functions, there are three basic classifications of software:

The application software aids in performing a task that will be useful for its overall functioning. Some of its tasks are office productivity suites, media players, data management software, security program among many others. Application software also denotes the web application and other mobile applications like that of Amazon, Facebook, Instagram, Photo, etc.

Embedded system software is the software that is used for handling machines and devices which generally don’t fall under the category of common computers. These are related to telecommunication networks, industrial robots, cars among many others. It is the Internet of Things (IoT) that is used for connecting all these software to a device.

The process of developing software has the following steps involved:

There are various methods like Agile development, DevOps, Scaled Agile Framework (SAFe), Rapid Application Development (RAD), Waterfall among many others.

In this process, the different tools that are used for building the software are collected. It is done based on the demands of the stakeholders and other prominent management members.

In this process, the structure that is used for setting the base of software is decided with the help of storyboards and models.

With the use of all the gathered information and tools, a model is built by making use of modeling languages like SysML or UML. This is done for creating an early validation, prototyping along with stimulating the design of the actual software.

The right code that is needed to create the software is decided and developed in this step of software development. This is a process that will involve peer review along with avoiding the issues of early production software tests.

It is a pre-planned process of software designing and coding that is used for creating a simulation of the real testing situation.

In the process of deploying, the software is testing for any other prevalent bugs or issues which have been missed in the previous process.

In this step of software development, the old data that is essential for the program are transferred to the latest and updated software program. It will help in the smooth function of the software.

The final steps of software development ensure that the project is free from any form of quality or delivery issue present in the lifecycle of the software. Models like Capability Maturity Model (CMM) are used for the process of maintaining the project. 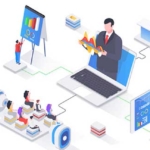 How to become an influencer